Training Algerian officers on operation of CSD
DEMAS prepared and lectured several tailor made training courses for different clients covering their needs regarding dredging and its operation. Based on this experience DEMAS has developed a course programme with a number of modules, which can be given as independent lectures. The manuals of these modules are a general guidance for the interactive lectures given in the classroom.
Download project sheet
Top

Maintenance Dredging at Esbid el Burg fishing port
The client asked for a study on siltation problems to the access of the fishing port of Esbid el Burg in the Damietta branch of the Nile. Two main recommendations on the study were the purchase of a specially designed cutter suction dredger and auxiliary equipment in view of the widening of the access channel and port basin; and the developing and implementing of a staff training programme.
DEMAS advised on the tender documents for the equipment and evaluated the tenders submitted. Together with the Egyptian authorities DEMAS supervised the construction and testing of the equipment.
Download project sheet
Top

Training of crew and project management for Backhoe dredge operation
DEMAS provided for the Ghanaian crew a two week dredging course in the Netherlands and guidance during further education by suppliers of the equipment in both the Netherlands and France.
Furthermore DEMAS provided on site project assistance and coaching of the new local project management during the first dredging project of the trainees with the backhoe in Ghana.
Download project sheet

Assessment and technical assistance for upgrading Takoradi Shipyard
DEMAS performed the survey to establish the need for the rehabilitation of the Shipyard, collected data, prepared general layout and design drawings and prepared technical specifications. DEMAS did render its services to support the client in executing of the project by providing: general and detailed designs, work methods, consultancy services and supervision.
Download project sheet
Top

Netherlands Assistance to the Department of the Environment of Zanzibar
A coastal erosion study in Zanzibar within the framework of "Netherlands Assistance to the Department of Environment of the Government of Tanzania (NADE)". The study was carried out in conjunction with others with the objective of identifying the causes of existing coastal erosion on the islands of Unguja and Pemba of the Republic of Zanzibar and provide recommendations to address coastal change processes.

Supervision of dredging for the Entrance Channel Improvement Works to Dar es Salaam
The dredging works to be executed comprises the straightening, widening and deepening of the entrance channel to the Port of Dar es Salaam, including the reshaping of West Ferry Point and dredging of the Inner Harbour. The material to be dredged is partly used for reclamation and partly disposed off in an open sea disposal. Environmental monitoring of the offshore disposal was required. DEMAS provided an Engineers Representative, a Deputy Engineers Representative and a Superintendent Dredging to assist the Engineer on the project.
Download project sheet
Top

Sudan Ports Corporation
Advisory services for port development projects
DEMAS carried out on-site feasibility studies into several major port development and extension projects in The Sudan. In Port Sudan a review was undertaken into the feasibility for upgrading two berths and extending the principle container berth. An on-site survey was undertaken to determine the best location for a proposed slipway in Port Sudan. In Osman Digna harbour a study was carried out into the proposed expansion of the existing facilities. Locations for small harbour facilities along the Sudanese coastline were investigated.

Roseires Dam emergency dredging
Technical assistance and training of operational crew and supervisory staff for dredging sediment in front of intakes of the Hydro-electrical power station at Roseires Dam .
The project is a technical assistance programme DEMAS that commenced in 1983 to provide the Ministry of Irrigation and Dams of the Government of the Sudan with operational expertise in the dredging of silt with clamshell dredges and submersible pumps. TA consists of assistance in the project organisation, planning, operations, surveys and maintenance of dredging equipment.
Download project sheet

Overhaul cutter suction dredger Abul Hassan
Technical assistance for the overhaul of cutter suction dredger (CSD) and auxiliary equipment. DEMAS assisted with the procurement, tender procedures and supervised the building of the CSD in 1980 for the Ministry of Irrigation, under the Dutch aid programme and has trained the crew to operate the dredger. The dredger had to dredge the silt from the intake channels to the pumpstations along the Blue Nile. In the consecutive years DEMAS assisted the Ministry at regular intervals with the overhaul and repair of the dredger.

Roseires docking facility
To carry out maintenance on the underwater hull of the dredging equipment based in the Roseires Reservoir a docking facility had to be created. The equipment to be docked consists of two pontoon-floating grab dredgers, split hull barges, auxiliary tugs and vessels. DEMAS prepared a design for the construction of a concrete docking platform on the embankment of the reservoir and prepared the Technical Specifications and Tender documents and procedures. Pre-qualified contractors were invited to tender. Tenders were evaluated and upon award of contract DEMAS supervised the construction on site on behalf of the client.

Silt Monitoring Roseires Reservoir
For the monitoring of the siltation in front of the power intakes of the Hydro-power dam at the Roseires Reservoir DEMAS provided an engineer/surveyor expert. Post flood bathymetric surveys were carried out to establish the quantity of deposited sediment. Technical assistance was provided to several operations of the dam, among others the procedures in the operation of the sluices.

Technical Assistance and Advisory Services, Abu Naama
Advisory services to the Sudanese Arab Kenaf Co. Ltd. to improve the water flow in the intake channel from the Blue Nile to the irrigation scheme pump-station. Design, tender procedures and supervision of construction of a dredge with training of staff and crew on operational and management skills. DEMAS conducted a feasibility study and presented recommendations for the utilisation of a small cutter suction dredge. Preparation of tender documents, conducting tender procedure, bid evaluation and ship yard selection. DEMAS supervised the construction and subsequently assisted with commissioning of the dredge in Sudan. After commissioning DEMAS carried out a training programme for the staff and crew at the site. One dredge master was assigned to the project.

Gash Delta Crash programme
Every year, the rainy season brings to life the Gash river that ends in a delta in the desert north of Kassala, in the Sudan. During that short period, a network ofirrigation canals is fed via a number of inlets on the West bank of the river. DEMAS was invited to investigate ways of rehabilitating and improving the water flow through the canals so that local agricultural production could increase. There was little time available for the proposed crash programme.
Download project sheet

White Nile dredging equipment
Earlier and successful projects carried out by DEMAS in the fields of dredging, weed clearance and siltation control in The Sudan, led to a further invitation from the Ministry of Irrigation to analyse, with financial help from the World Bank, the dredging needs in the canals feeding the forty irrigation water pumping stations along the White Nile and to propose the most appropriate equipment for carrying out the work.
Download project sheet 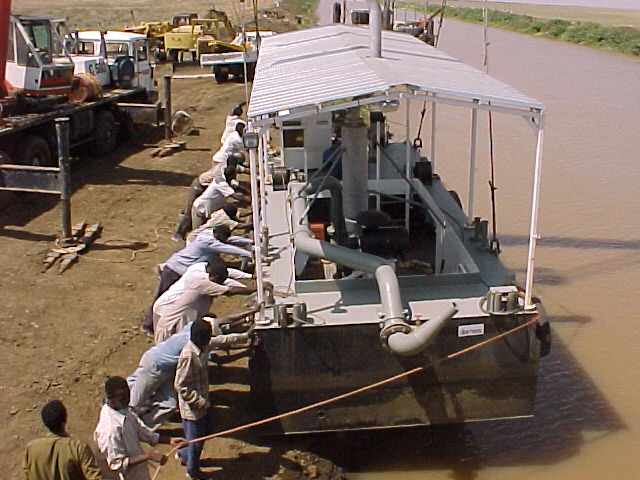 Construction supervision, assembly & training of crew of cutter suction dredge
After successful trials in the Netherlands, a CSD was shipped to the Sennar Sugar Factory in the Sudan. The dredge was assembled in a workshop and transported and launched from the dredge trailer in the intake channel. The crew was instructed and familiarised with the dredge in a 6 week training program.
Download project sheet

Supply and Rehabilitation of Roller Sluice Gates for Water Control Regulators
DEMAS did win an international tender by the Ministry of Irrigation and Water Resources in the Sudan for the supply and rehabilitation of Roller Sluice Gates (RSGs) for water control regulators in the Gezira Irrigation Scheme. The project includes design and supply of 26 existing RSGs. Furthermore, missing parts need to be supplied for another 23 RSGs, which were supplied some time ago and stored at the client's yard in Wad Medani.
Download project sheet
Top